Another Look at My First Ever Chapter Book I'm not too much of a re-reader, so I would say that I see little to no reason to look at old material that I've read before (well, I AM planning to re-read the Harry Potter series, but you're going to disregard that information) and so normally I wouldn't have had a reason to look at something from the genesis of me as a reader.  Well, with my last semester, I had a chance to re-visit not only this particular book, but also about twenty or so major works of children's literature in one of the best classes that I've taken in college.

My professor obviously knew a good deal about this series, and it was really worthwhile to attend his class while we were talking about this book.   I really want to share one anecdote that he taught us in class, one that I'll carry for a while longer, I think:

Within the many chapters of description, there exists a game in which Pa (Laura's father) enjoyed playing with his two eldest daughters.   It's called Mad Dog, and it involves Pa chasing the girls around on his hands and knees, barking and acting, basically, like a rabid dog.  Laura claims that this used to scare her a good deal, at times.  Here's a picture of the illustration provided in the book to show this game in action:

And, speaking of this illustration, can we talk about the, admittedly, pretty original illustrations for the chapters books?   They're wonderful; great, but, as my professor had pointed out to the class, they show "Pa" in a more handsome light than he apparently looked like in real life.

Here is another example of an illustration of "Pa":

For comparison, here's an actual picture of "Pa" (Charles Ingalls) in real life: 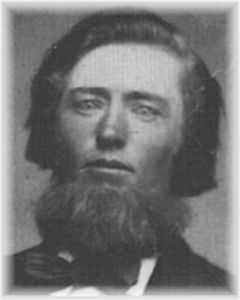 I am not a lookist by any stretch of the imagination (I can't recall the last time I wore make up) but if you were a kid, and this guy played "Mad Dog" with you, I think you'd be genuinely frightened as well!

Alright - with that out of the way, how does this perennial favorite look like, nowadays?

It's nice.  Pretty simple (that's kind of the point, anyway, right?  It's so easy to read that it's a cult classic in Japan for beginning English readers) and it's possibly the most straightforward narrative imaginable. A straight line forms the narrative, going from one season to the next. The characters' progression, anecdotes (usually simple stories) and explanation of how things were done in the Ingalls' little society make up the structure of the story.

The illustrations, again, are quite pretty and sweet.  This is a book meant for a child to read aloud - the prose is tight and, at times, whimsical - it certainly feels like a work written by an older person reminescing about their childhood - written from a place of knowledge that comes with getting older, but still maintaining a sense of innocence and warmth, befitting a narrative written from a child's point of view.

It was nicely nostalgic to go back and read this again, but now I understand that it is possibly one of the simplest things available to read for a child in school.  The sentence structure does not hail that far from some classic Fun with Dick and Jane, and there's very little available, outside of the supplied anecdotes in the narrative, which offer much in the way of conflict for the characters.

In short, it's a nostalgic piece of easy reading that feels like a comfy and safe story that is exactly appropriate for the purposes of encouraging a child to get into chapter books, especially reading aloud.   Really, it's one of the best of its subgenre that I know of.  It's just not particularly exciting or enlightening.

What Will I Do With My Copy?Save it!  Pass it down to my nephew as a beginner's book to ready him for the aforementioned reading onslaught that is the Harry Potter series!